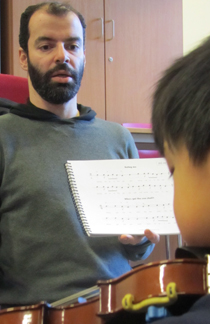 Gregory Emfietzis was born in Thessaloniki, Greece. He played the violin and sang, performing in many international festivals, concerts and operas, before and while taking a degree in Music Science and Art at the University of Macedonia.

He moved to the UK in 2004, to study composition with Christopher Fox at Huddersfield University and with Fox, Richard Barrett and Jennifer Walshe at Brunel University. His music has been performed by leading ensembles across Europe and North America; the groups he has worked with include Asamisimasa (Norway), London Contemporary Orchestra (UK), Okeanos Ensemble (UK), Orkest de Ereprijs (Netherlands) and the Sonic Inertia Performance Group (USA).

In 2013, his quintet Fear (not), winner of an international competition hosted by the Wiener Konzerthaus to mark its 100th season, was performed by members of the Berlin and Vienna Philharmonic Orchestras, and his opera The Darkness of Mistico was staged at the Greek National Opera House.

Some works, such as the miniature opera Mirror, mirror on the wall: the crucial moment, seem written as much for actors as musicians. Others, such as How to… corrupt someone, tend towards a more instrumental or sonic theatre. In his current project, Music Impossible, a ‘magnified’ shadow theatre piece funded by the London Symphony Orchestra’s Soundhub scheme and Arts Council (England), a fairytale story is narrated by musicians themselves as acoustic and visual puppets.