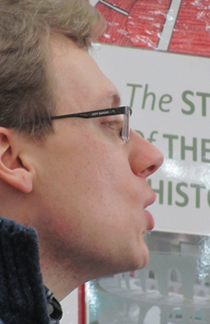 William Cole read Music at Clare College, Cambridge where he graduated in 2013 with First Class Honours. He has conducted student and semi-professional ensembles, including the Hampshire Sinfonia and all the Cambridge University ensembles, in a broad range of orchestral and operatic repertoire and is currently Musical Director of Opera Lyrica.

As a composer, recent performances of William’s work have been given by the Choir of Clare College, Cambridge, violinist Peter Sheppard Skaerved, the Hampshire County Youth Orchestra and members of the Britten Sinfonia. Future projects include a commission for the Britten Sinfonia’s 2013-14 At Lunch series, to performed at the Wigmore Hall and broadcast on BBC Radio 3.

William is also active as a pianist, with future recitals in Cambridge and across the UK, and was a Choral Scholar at Clare College. Community work has involved workshops with young children in the south of England as part of the Elastic Band, collaborations with children in Soweto, Johannesburg, and projects with English Touring Opera.