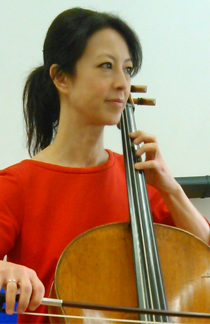 Sheena began her ‘cello studies in Hong Kong at the age of 11. Three years later, she moved back to her father’s native Scotland where she attended the Douglas Academy music school. At the age of 16, Sheena was invited to perform Prokofiev’s Concertino with the junior orchestra of the Royal Scottish Academy of Music and Drama where she went on to study with William Conway. She was then awarded a post-graduate scholarship to study at the Royal College of Music in London with Amaryllis Fleming.

Sheena has won prizes for ‘cello solo and chamber music playing, as well as piano solo and piano accompaniment prizes. An award from the Countess of Munster Trust enabled her to acquire her beautiful Barak Norman ‘cello, made in 1716.

Sheena has played in master classes with Pierre Fournier (at the age of 13), Paul Tortelier, William Pleeth and Alexander Baillie. She has enjoyed a playing career both as a chamber musician and as a freelance orchestral player but she now dedicates her time mainly to teaching.